Spiral Dance is an Adelaide based band focusing on the concepts of magic, myth and legend.

Award winning group Spiral Dance, based in Adelaide, has been playing high-energy music to enthusiastic audiences throughout Australia for over ten years. With a combination of haunting vocals, evocative fiddle, intoxicating guitar riffs and groovy accordion lines, underpinned with potent bass and dynamic percussion, the band presents an eclectic blend of traditional folk/rock with powerful self-penned songs and tunes. Enchanting melodies intertwine with mythical tales that are sure to captivate your soul, tease your mind and steal your heart, casting your spirit into the realms of magic and the mists of ancient time.

The band was formed in 1992 as a project to explore some of the more mystical elements in life and has drawn its energy from the song-writing and vocal skills of Adrienne Piggott. Adrienne's haunting lyrics are supported by Nick's driving guitar work, Ingrid's vibrant fiddle playing and Paul's innovative accordion lines. The whole sound is underpinned by Brent's solid bass lines and Rick's textured percussion, all carefully arranged to blend acoustic folk-rock with lush Celtic harmony, creating an almost tangible musical aura that envelopes the audience.

Spiral Dance has released several CDs to critical acclaim both at home and overseas.

The majority of songs are written by Adrienne:

"Having grown up surrounded by magic and a love of legends, I longed to put these feelings into song. I believe we all have an affinity with the magical elements of our existence, and the songs are written to invoke these emotions from within.  These impressions need not be left behind in our childhood." 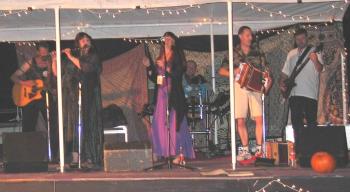 The Quickening Review
Award-winning group and Australia's premier pagan folk-rock band Spiral Dance have announced the release of their latest album "The Quickening". After the success of "Notes of Being" the band used many of the same ingredients to produce the recording; David Lokan at Big Sound Studios in Adelaide engineered it, Adrian Cowell again did the artwork and though the whole band had a hand in production, it was Nick Carter that was responsible for sculpting the sound of the entire project.
The album itself features 14 tracks, the first eight forming a song cycle of the sabbats that make up the Wheel of the Year in the Celtic calendar. The song for the festival of Imbolc called "The Quickening" became the title track for the album as it conveyed a positive energy associated with fertility and the spark of new life that reveals the coming of Spring.

"the maturity in playing and arrangements has noticeably progressed, as has the willingness to add different textures to the musicthe title track 'The Quickening' is a perfect example of the thought put into arrangement and production on this album, and is a mature, melodic and powerful piece of musicthere is plenty of light and shade throughout the CDthis is still distinctively Spiral Dance but with more of an edge and it is all the better for it"
Michael Hunter, dB Magazine (#385; May 2006) 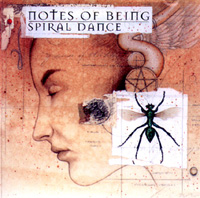 Notes of Being
The Pythagoreans were the first to discover the numerical ratios of musical intervals and believed that the movements of the sun, moon, stars and planets would form a celestial harmony. A harmonically perfect universe seemed very appealing to Spiral Dance and the concept was stretched further to include the life force and spiritual energies of all things pulsing together in singular accord and the album title "Notes of Being" was born.

Woman of the Earth

CD - OUT OF PRINT
Click Image for Detail View

CD - Out Of Print

Over the Nine Waves

"Over nine waves we are coming sailing
Over nine waves running to your shore
Sons and daughters will be weeping, wailing
Your land will be ours forever more"

Tales told with song and narration of the legendary characters from the Irish Mythological and Ulster Cycles, which are the oldest surviving prose in western literature, memorised as they happened and handed down from generation to generation by bards before the introduction of literacy.

Copyright notice: All music on this page is protected by copyright law and by international treaties.  You may download this material and make a reasonable number of copies of this material only for your own personal use.  You may not otherwise reproduce, distribute, publicly perform, publicly display, or create derivative works of this material, unless authorized by the appropriate copyright owner(s).